The much anticipated Benjamin Prync’s ’Wrap Up 2013′ mixtape is finally out and ready for your downloading pleasure hosted by Dj S-kam Zac of G-52 Inspirational. It features other artistes like Phillipe, Lyll Mykk and Brain Wade IP. We managed to hook up with him and he gave us the history behind the Wrap Up 2013 mixtape.

After the successful release of Ijo Bon in early February 2013, God took me on tours, among which was the Ijo Bon music tour in Eastern Uganda. It ‘robbed’ me of time to release anything until August 2013 after my final concert in Kumi – my home town, on the 24th of August 2013 which featured the entire SALT NATION clique. I returned to town and felt a great vacuum – a yearning for more among the fans. The bouncing baby boy ”Ijo Bon” was In need of a brother to play with. So I hit the studio, considering the year was ending, to release the couple of songs that were in studio and more during the time of tours as indicates the line up by Dj S-kam Zac  -the host of the CD, #wrapup2013.

Now you and I will agree to the fact that in spite of all the sweet things to mention about 2013, there were crazy, bitter sides of that year. People died in 2013, from top celebrities both locally and internationally, inclusive politicians, great liberators, great young people like singer, Mac Elvis, our brother, movie stars… no wonder they died towards the end of the year #wrapup2013. It goes on to include interpersonal experiences of loss of loved ones; of relatives and friends… now that was me. I don’t know about you though. It also goes on to the great battle against homosexuality that our nation has had lately. There is actually every crazy thing to say about 2013 as there is Good Stuff.

A few weeks before I hit the studio to compile my Wrap Up 2013 singles, the Lord gave me a vision. I had a dream where three men whose faces were disguised held me tight to my bed, bound me and tried to cut my toes off. That was their mission.

I woke up to pray and immediately the Spirit of the lord was upon me as I prayed meditatively. God gave me an awesome revelation through my dream in which He also made me understand more than there was about just myself in the dream.

Explanation of the Dream

The three men with disguised face represented the many people, and spiritual forces in my life, and yours, and in the church that were angry at the progress that the Lord has blessed me, you and the church with, and determined to sabotage ‘the dream’; the progress of them that feared the Lord.

The bondage is quite clear. It simply means spiritual bondage as well as physical oppression…

No wonder they came while I was in bed  – resting/asleep. Which means the devil and the people he uses against you do not want to see you at peace and at rest. It also means that sleep gives room for attack. You need to be watchful and prayerful.

Then finally the cutting off of the toes. Just like the fingers enable you grab an object in the palm of your hand, the toes also help you create stability on the ground as you walk or move. The legs basically initiate movement, but friction and stability to sustain movement is created by the feet and toes. The cutting off of my feet in the dream was significant of the mission of the enemy through ordinary people we live with, work with, and minister with to sabotage our progress by creating hate and lack of vision in their heart and mind. Some of them will be a hindrance to your progress without even you or them knowing!’

In many ways as revealed by the ugly odds of 2013, the devil has been up against the great progress and revolution of the church and ministry of Christianity and godliness by creating a lot of worrying, commotion, hatred, and poor leadership, loss of lives of loved ones, disasters and many more stuff as such. You know what has been going on in your own life too on a personal basis too, if you can relate to this.

You probably have experienced disappointment, frustration in your efforts, loss, and other stuff. Apparently you are thinking of giving up on chasing your dream or at least finding other means of achieving your purpose while doing a little less prayer, and church going, putting less Jesus in your lyrics to sell out to the secular audience and everything from A to Z that presents itself as an option.

God asked me to tell you to go hard. He’s got your your back.

God has given me three declarations to share with you; things he is going to make true in your life, career and family in 2014.

1. God is going give you fruitful connection; forget the heartbreakers, the untrustworthy people, the liars and backstabbers, manipulators and all kinds of haters. He is going to open your eyes to see the perfect and imperfect so that you do not fall in any form of trap or get heartbroken.

2. God is going to answer your prayers, keep on asking and believing .

3. God is going to  surprise you with gifts and blessings you had not even asked for.

4. God is going to  reward you for holding on to him

Remember that when you gave your life to Christ, God became your father, Christ redeemed you with his blood, price that cannot be measured by money value. Money, cloths and all the yearnings of our flesh are nothing to compare to the promise of reward that we have in him. John 14.1ff

God cares very much about everything pretty little thing you care to have probably even more that you do, he will give it to you. Seek first the kingdom of god and all other things will be added to you.

God’s desire is one, do not give up on him because it did not work out, giving up is a worse place to go. He will bless you

Keep the ideas that god has been giving you, God is going to bless you enough to realize fruits in all your investments. Keep being obedient.

Please pray this prayer with me: Dear Lord, as I go into 2014, I carry all my burdens unto you, choosing to be anxious for nothing, I submitting all my requests before you in prayer and supplication. Bless me again in 2014, forgive me for all the times I feel to fear and doubt in 2013, this new year, make me new again, forgive all my sin and help me live better so that I may fulfill the great commission as your servant and child. I love you Jesus. Amen’’

Powered by: G-52 Inspirational , SALT NATION and The One Question Network

The ShakedownMix 2022 – The Ultimate Party Experience 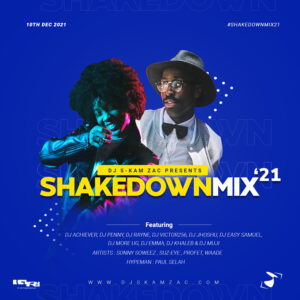 The ShakedownMix 2021 – The Ultimate Party Experience

The ShakedownMix 2020 – The Ultimate Party Experience